At looooooooooooooooong last, I have bagged myself another Julip from ebay!  The prices have been getting a little higher lately (probably my fault, things usually are!) but I hung on in there and got myself this little beauty ... 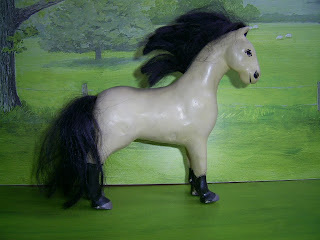 This is a Handy Hunter and he was made in 1973. He came with tack, a rug, rosette, headcollar and a bucket, all in virtually new condition!  Someone has had this little set for nearly 40 years and barely touched them.  If only they were all so good!

Posted by Model Horse Addict at 12:06 No comments:

I have taken delivery of another fine lot of vintage Julip horses!   These are also from ebay and although they are not in the best of condition, their great age makes them all the more appealing.

First up, here is Breeze, the 1st version Arab Mare. 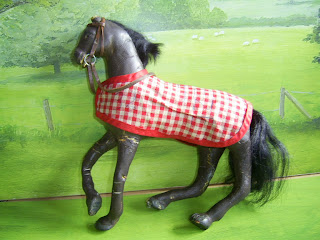 Sadly, Breeze doesn't stand up due to the wires in her hindlegs being broken.  OH is going to make me a stand for her to lean on!

Next up is a Thoroughbred, even earlier than the ones I've had before ... 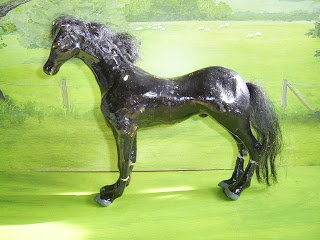 This is Lucifer (so named for his rather demonic eyes ...!). His legs have seen better days, but he stands up and is set solid.
Lucifer came with his brother .. 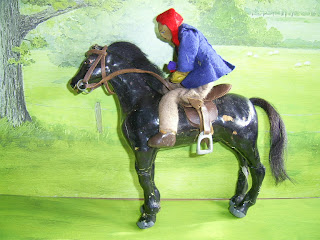 This horse is unfortunate in that his saddle, bridle and rider have all fused onto him, so he will be forever like this! They have been stored on their side which has meant the latex and leather has all been squashed into each other.  I just love the rider, she looks like she's had a few too many beverages!

Next up are the ponies.  The first is a rather bald Shetland. 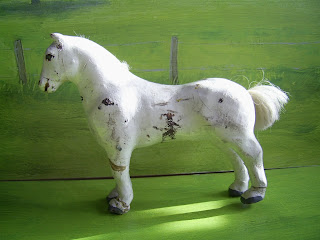 The paintwork isn't good, but he's still a nice pony.

Then there is a 1st version Dartmoor in a fetching dappled grey. 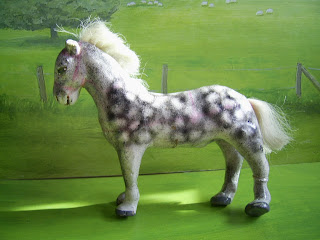 One of his hindlegs has set at an awkward angle, and the poor thing has been drawn on with red ink ... !

Lastly there is the little Icelandic Pony 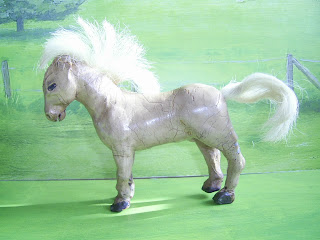 He is covered in paint cracks, but otherwise is ok.  This was the most expensive, despite being the smallest, due to its rarity.

These all came from the same vendor, selling on behalf of their owners who have had these since new back in the late 1950s/early 1960s. It must have been sad to see them go after so long, but here they will have a permanent home along with my other 200 Julips !!
Posted by Model Horse Addict at 10:45 No comments:

I've been a very bad girl and spent all my month's wages on an army of little latex ponies ... I'm sure that makes me certifiable, but it keeps me quiet.

There were two lots of very vintage Julips up on ebay this past month. I know it was greedy of me, but I can no longer help myself when such wonderful collections come up for sale.   I bid, I won. What else can I say?!

Anyway. Lot number one consisted of five horses, some moth-eaten riders and various pieces of tack, etc.  These were all from the 1960s. 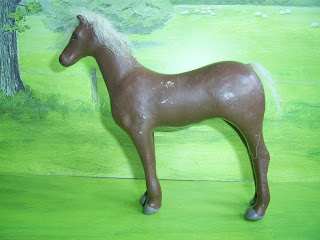 The horse above was a bit of a mystery at first. I compared him to a few of my other old Julips and he didn't seem to resemble them, but eventually I decided he must be an ANGLO ARAB, despite his head appearing to be much finer than my others. In every other respect, he was the same.  So that's Anglo Arab number 3 ! 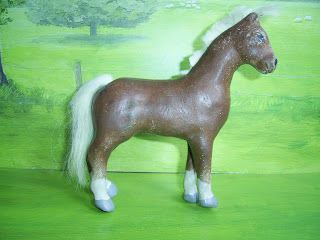 The next is a HANDY HUNTER in chestnut - he may have supposed to have been palomino, but not any more!  There were two of this mould in the lot ... 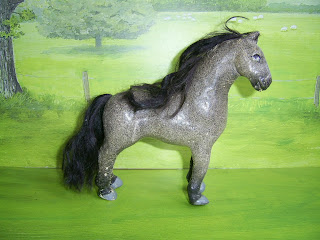 This one was not in such nice condition, but a pretty colour.
There was also quite a poorly THOROUGHBRED, also in a pretty sort of colour ... 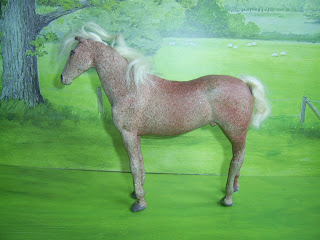 I've not seen one this colour before, a sort of rose fleabitten grey ?  Sadly, his legs are very sticky and most of his body feels soft. I hope the latex will set again so no further damage can occur. 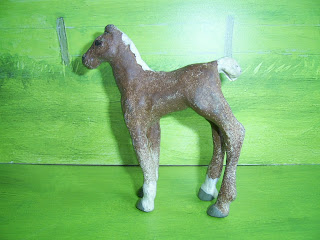 The last one in this little lot was a foal.  The leg wires are broken, but fortunately he still stands up ok.
I will introduce my next mulit-buy next time!

We're at the end already !

The penultimate Julip mould is the WORKING HUNTER.  This is a more recent addition to the range. It is taken from the plastic Horse Of The Year model. 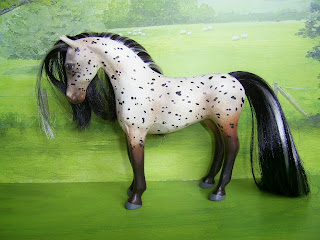 The model above was a "spare" (one off) from the Julip website.

Last of all is the YEARLING.  There have been two versions of this model. The first one had been around for many years, from sometime in the 1960s up until about 1990. 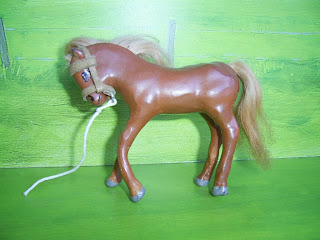 The second version appeared later in the 1990s and is a much nicer model. 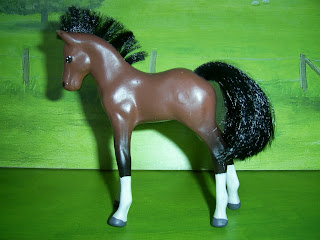 This mould is still available to order from Julip.

Next time, I'll be introducing you to some of latest acquisitions!

Posted by Model Horse Addict at 10:21 No comments:

Hello! I'm back from a short break and ready to continue with the Julip A-Z.

We next have the WELSH MOUNTAIN PONY, which has seen two mould variations.
The first version looks like this: 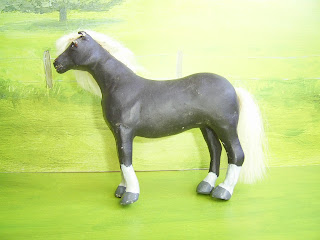 This is a small pony and my example is from the 1960s.  The second version appeared in the later 1970s. 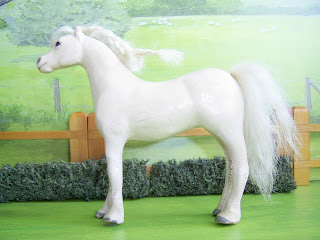 Mostly the same shape but a little taller and a nicer head.

Next is the WELSH PONY. This is a little bigger than the pony above and represents Section B (for those who know anything about Welsh ponies!).  This model has also had two versions. The first is from the 1950s-1960s. 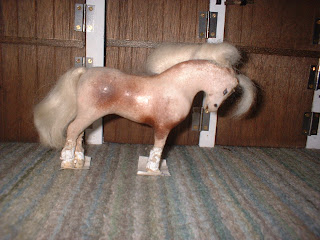 Above is a poorly skewbald pony with legs that went gooey and then set solid afterwards.The second version was a nicer looking pony altogether. 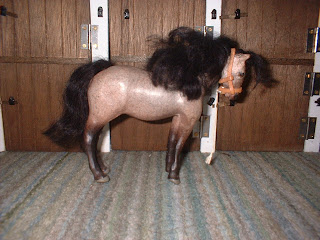 This model is from the early 1980s.  This mould ceased being made sometime in the late 1990s and the "new" Welsh Pony is now what used to be called the Pony Mare!


Posted by Model Horse Addict at 11:26 No comments:

First off is the WELSH ARAB, which is one of the few I don't have an example of !  It's a pony-sized model which was discontinued sometime in the 1970s and which doesn't seem to appear very often on ebay or in collector's sales.  I'll just have to keep my eyes peeled and my bank balance in the black and hope that one day, I'll be able to snap one up!

On then to the WELSH COB. This is one of the relatively recent moulds, introduced in 1989. He has been used quite a few times as various catalogue models and is still available to order. 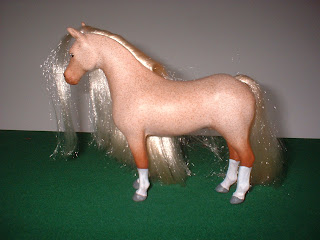 Posted by Model Horse Addict at 10:10 No comments:

Julip's TAFFY THE PIT PONY is the only Shetland they currently make. He was introduced in 1989 and was only available in one colourway - skewbald.  The mould is now just "Pit Pony" and can be ordered in any colour you like. 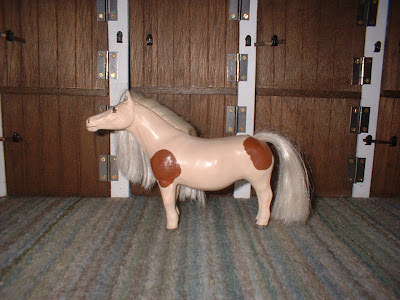 Above is an original Taffy model from the early 1990s.

The THOROUGHBRED has been on Julip's price list for most of the time, in one guise or another.  My earliest example is the bald and slightly green-looking horse introduced in my first blog.  Here are examples of two other Thoroughbred moulds. 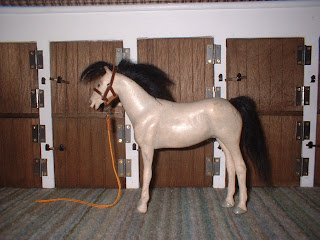 This is a rather skinny TB from 1974. This mould was used up until the mid 1970s.  The next version appeared around the early 1980s and was a much more handsome specimen. 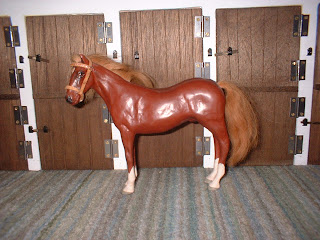 The model above was a Christmas present from 1981.


Posted by Model Horse Addict at 10:56 No comments: